Your Source for University News 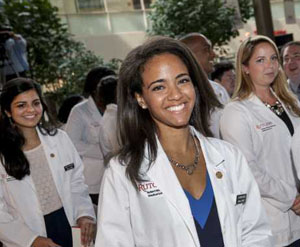 'The White Coat Ceremony is a reminder that after all the things you do, the most important thing is to take care of people.' – Robert L. Johnson, dean of New Jersey Medical School

“You are entering this medical school at a time that is both exciting and historic,” Peter Amenta, a physician and dean of Robert Wood Johnson Medical School,” said to the 134 medical school students who were gathered at the Arline and Henry Schwartzman Courtyard at Robert Wood Johnson Hospital in New Brunswick. “It is going to be up to you, the inaugural class, to define this opportunity.”

Robert Wood Johnson Medical School and New Jersey Medical School, which became part of Rutgers on July 1 when state legislation that reorganized higher education was enacted, have been participating in the White Coat Ceremony, along with Rutgers School of Dental Medicine, for almost two decades.

Started at Columbia University in 1993, the ceremony is part of an effort to keep humanism in medicine and is held at medical and dental schools throughout the country. The event also inducted more than 40 current medical school students into the Gold Humanism Honor Society.

“The White Coat Ceremony is a reminder that after all the things you do, the most important thing is to take care of people,” Robert L. Johnson, a physician and dean of New Jersey Medical School, said at the school’s ceremony in Newark. 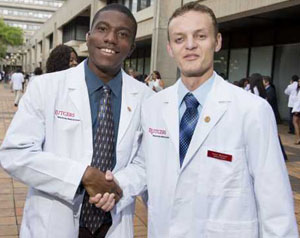 Students taking part in the event said a highlight of the ceremony is the reading of the Hippocratic Oath, in which future doctors promise to be loyal to the profession of medicine and, “exercise my art solely for the cure of my patients.”

“I feel like I’m on top of the world today,” said Lauren Evans, a 2013 Rutgers graduate from Gloucester County, after donning her white coat with the red Rutgers University logo at the Robert Wood Johnson Ceremony. “I’m so excited about what is ahead of me.”

Amid cheering from family and friends, faculty – or family members that are already physicians – presented each medical student with their new white physician coat, which traditionally have come to mark the start of a student’s medical school career that will include a four-year academic program followed by medical residencies.

“It was almost like a mythical object,” Daniel Nguyen, a graduate of the College of New Jersey, from Warren Township said after donning his new coat at the New Jersey Medical School ceremony. “It wasn’t until someone actually put it on me, that it started to feel real.”

Several speakers mentioned the enormity of the task ahead of this class of medical students, at a time when the Affordable Care Act is scheduled to go into effect and the future of health care is still being debated.

“I have a huge amount of respect for what you all are doing,” keynote speaker Becky Quick, co-anchor of CNBC’s “Squawk Box,” and a Rutgers alumna, told students entering the Robert Wood Johnson Medical school program. “You are stepping up at a time when your country needs you.”

Quick, who graduated from Rutgers with a political science degree in 1993, and was editor-in-chief of the Daily Targum, choked back tears as she told the story of her 12-year-old brother who was hit by a car in 1990 and suffered a traumatic brain injury. Although he remains in a wheelchair and can’t walk or talk, Quick credited caring, selfless physicians for keeping him alive.

“Doctors reach you on so many different levels,” Quick said. “When illness strikes it affects everyone who loves that patient.”

The two medical schools and the Rutgers School of Dental Medicine, which will hold its White Coat Ceremony on August 28, are now part of Rutgers Biomedical and Health Sciences.

Cecile Feldman, a dentist and dean of the Rutgers School of Dental Medicine, said White Coat ceremonies this year are even more significant because the class of 2017 they will be the first class of Rutgers students to participate.

“By donning these jackets, students demonstrate their commitment to uphold the profession’s values and ethics, and they promise to show compassion to every patient," Feldman said.