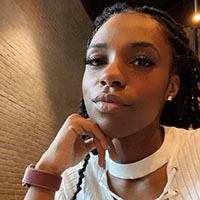 Spring of 2017 I was a senior in high school and I was introduced to ODASIS through a student that was currently taking the MCAT class. From there I went to orientation, completed STP and completed all of my sciences which allowed me to become a member of the same MCAT class as a Junior at Rutgers. During this class I was taking biochemistry and basic stats for research while working and being involved in my sorority. To say that this was easy would be an absolute lie; however, I can say that my friends who were in the MCAT class helped to keep me grounded and focused. Among this group there is a “no person left behind” mentality, we helped each other keep track of all of our exams, quizzes, mock exams and assignments that were due. That type of attitude is not easy to find in life, but especially among pre-med students. Knowing that the friends I found in ODASIS were some of the best at knowing how to balance studying and other life activities influenced my decision on which medical school I would attend. After much consideration, I turned down offers from other schools and chose to attend NJMS, not only because of the curriculum and staff but because of the support system that I knew I would find. There are countless ODASIS students walking the halls of NJMS in all years of medical school and even as staff. Now, as I am writing this, I am 3 days away from starting medical school and officially becoming student doctors. I can confidently say we are more ready than ever knowing that we can ask almost any other ODASIS alumni for help along the way and they will be there with all resources available. That is a level of confidence and comfort that simply cannot be found without programs such as ODASIS. As much as I hate to say it, truly it pains me, Dr. Khan is right; eat your books!