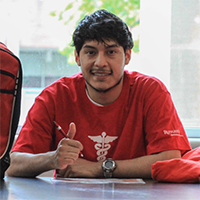 For Bryan Cabeza, graduate of the Rutgers University class of 2021 and matriculant into Rutgers New Jersey Medical School, community has always been a central aspect of life. “Medicine is the way I can reach out to people and make lasting connections,” he said. This was a calling that would allow him to both hone his skills in science and honor his love for community Bryan’s long-term aspirations are to run a clinic to provide underrepresented populations with holistic and high-quality care.

Bryan’s own experiences during his first year, initially at Purdue University before transferring to Rutgers New Brunswick, cemented his resolve. Away from home for the first time, Bryan overworked himself by taking on too many responsibilities without a solid support system behind him, and ended up being hospitalized. Bryan then chose to transfer back to the East Coast to continue his college education. This is where his experience with ODASIS came in.

Bryan credits ODASIS with providing him with the mentoring, advising and academic support that allowed him to succeed during his undergraduate career. The community that he found in the ODASIS staff and fellow students was vital to Bryan’s success. “It’s like a family,” Bryan says fondly while reminiscing on his times at ODASIS. “They adopt you, take you in, and give you advice and strategies for success that you would normally have to pay someone for.” Community has long been important to Bryan, and he is thankful for the ODASIS community’s role in his journey to becoming a healthcare professional.